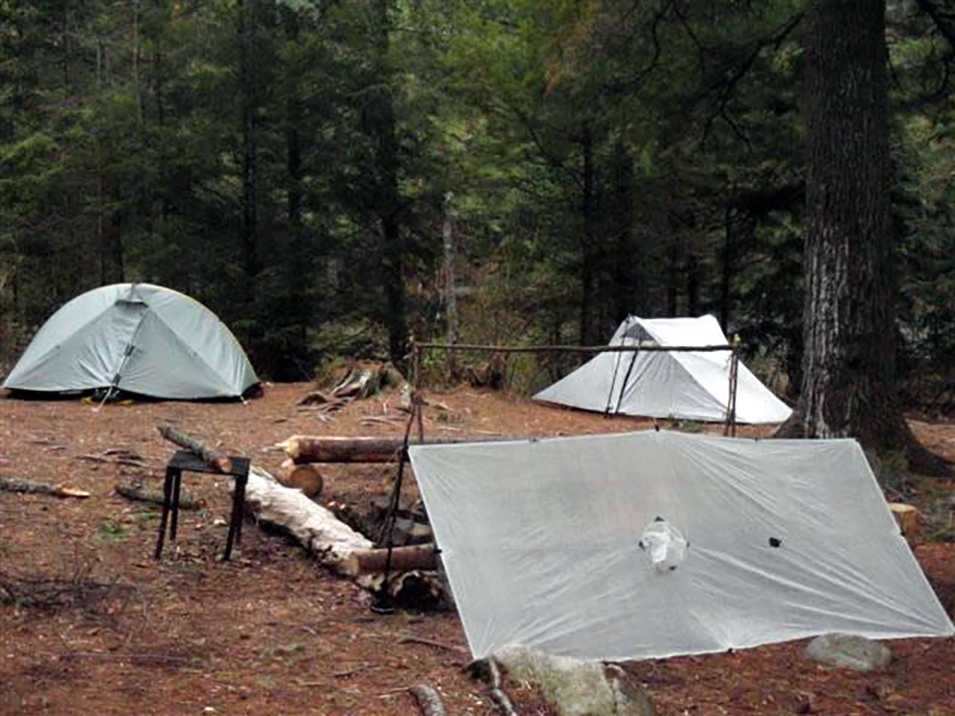 Now, it’s no secret that I like to hike long trails with minimal amounts of gear, but sometimes things just aren’t made to work that way. You see, the girls were away for the long weekend and it was time for a good old fashion beerpacking trip. A buddy and I loaded our packs with gear, food, and booze and prepared to head into Algonquin Provincial Park for 2 nights. Below is a map of our campsites and route. 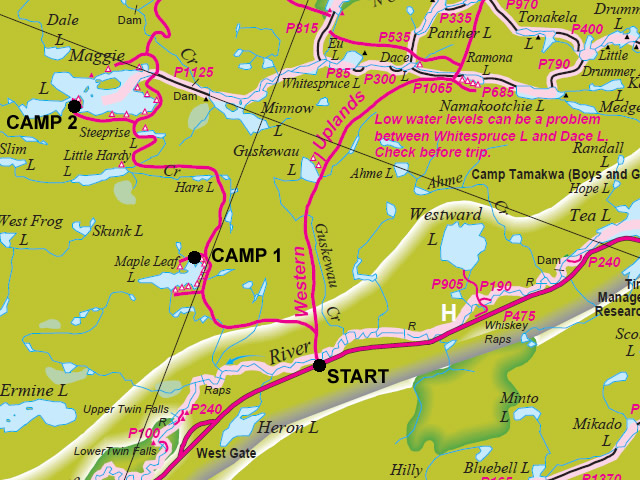 I had an appointment on Saturday morning, so I didn’t end up picking Jason up at his place until about 1 in the afternoon. It was raining on the way up and we made terrible time…taking about 4 hours, we didn’t get our permit until 5:30pm and finally made it on the trail at 6pm. 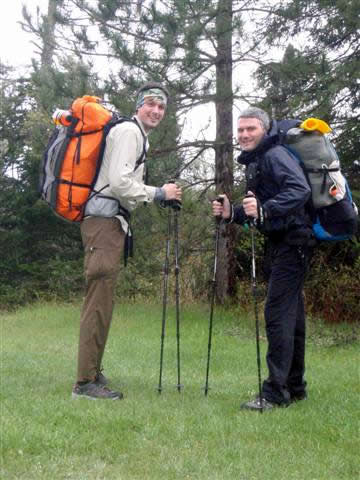 The trail is a nice stroll through the woods. It had been raining and the spring melt turned the trail to mud. 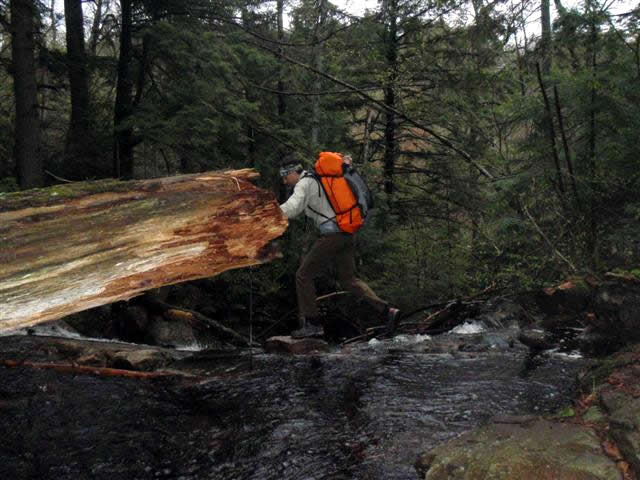 We pass a very nice little waterfall, requiring some fancy footwork, before it quickly heads up to crest a large hill. With a light pack, this would be a breeze, but having 20 lbs of beer in my bag quickly turns this into a workout! The hike is uneventful for the most part, it is a short 1.5 hours to get to Maple Lake. We have some issues with people nabbing our campsite so we make our way to the North side and find a spot. The wind is really coming in and the temperatures is dropping. We set up shop for the night. 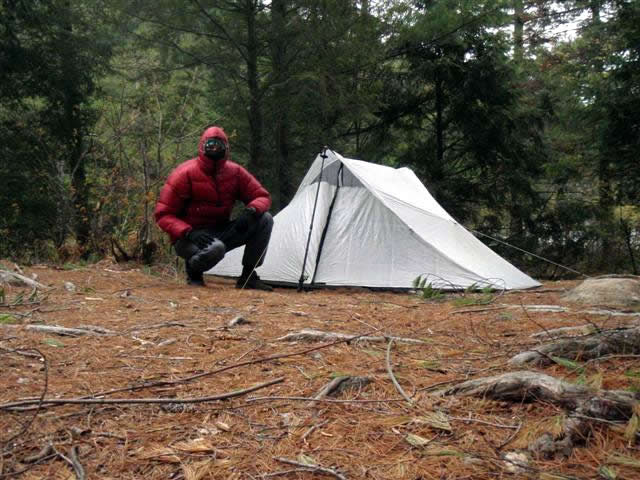 Having a fire is near impossible with the high winds, and so is using our bushbuddies. I rigged up my poncho/tarp in an attempt to block the gusts. It works well enough and we set up our cook kits under the tarp. 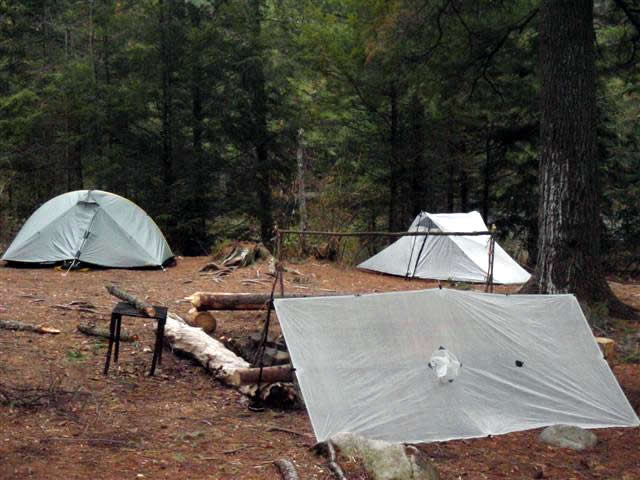 We sit back, cook our dinner and have a few beers. Sadly, the wind is so strong that at one point is blows my tent down, and we retire to bed relatively early hoping that the morning will bring calm and sunny weather.

We were up and about by 9am on Sunday morning. The temperatures dropped to about freezing during the night but nothing that we weren’t prepared for. It warmed up, but there was still a chill in the air. I bundled up in anticipation for our hike. I planned to shed clothing layers as I hike and produce some heat. 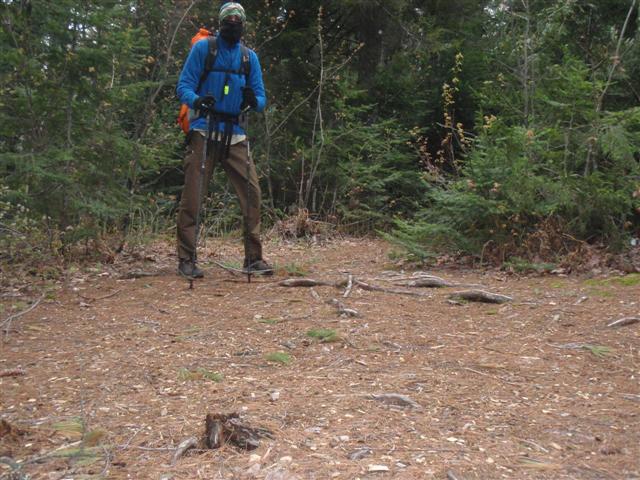 It was an easy evening last night so we had quite a bit of energy for the hike to Maggie Lake. The day didn’t warm up too much, there was a bit of hail at one point and some drizzling, but we knew that once we got to our next site, the beers were going to be flowing. We joked about how we were going to keep the beer cold, and Jay thought it was a smart idea to grab some ice along the way. 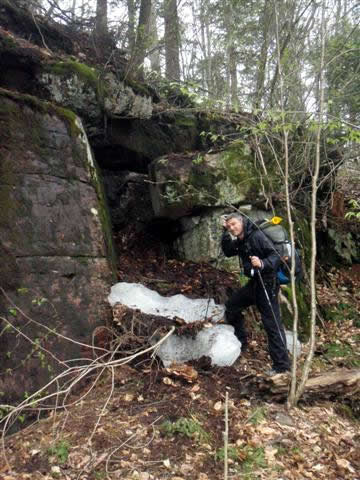 I convinced him that simply putting them in the lake would cool them down enough and he agreed, leaving the ice behind. It was only about 2 hours before we hit our next campsite, so it was barely past 2pm when we got there. Plenty of time to set up the bushbuddies and have some lunch before setting up camp. Of course, we broke out the beers for lunch. 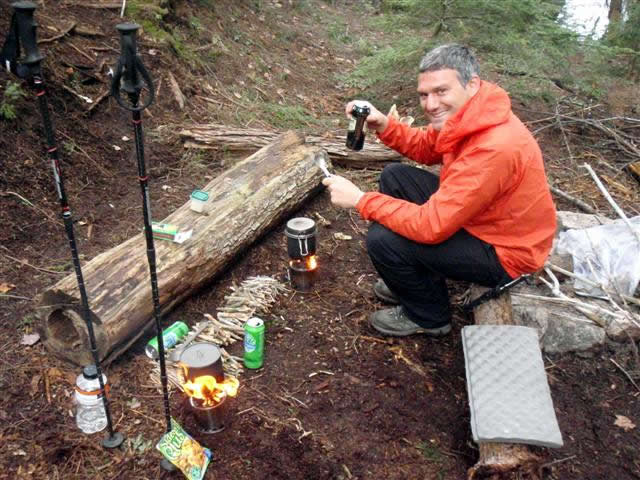 With lunch finished and a collection of beers staring at me in the face, we put up our tents and began to put together our village for the evening. We collected wood, set up some logs to use a seats, and chilled our drinks in the lake. 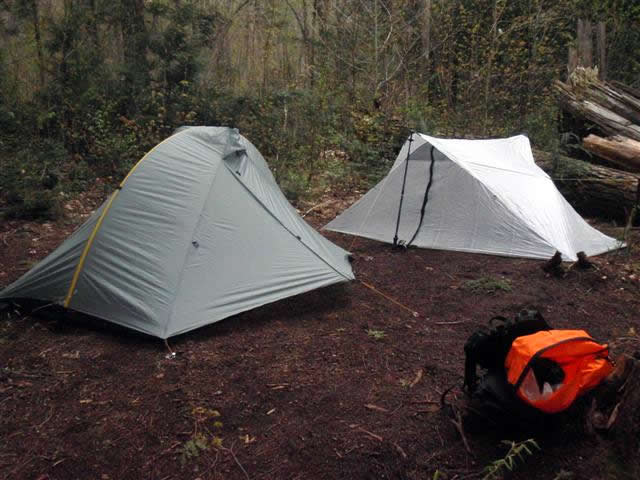 With the chores complete, there was only one thing left to do! Let the drinking begin… 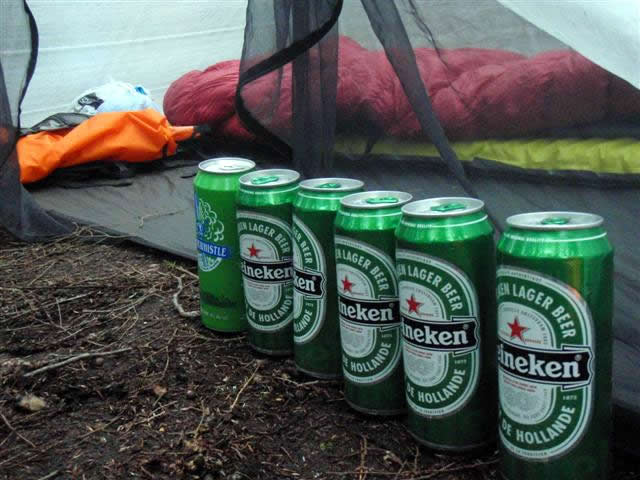 The night was exactly as planned – a couple buddies sitting around the campfire having some brews. The camera didn’t come out that evening, seems that we didn’t do much else other then drink and sit around…the perfect long weekend! By midnight we had finished our beers and it was time to stumble to our tents. We knew better and hung the bearbag earlier in the evening.

We were up by about 9am but the beers had done a number on us. It was headaches and fuzzy vision for the first hour or so. Some fresh lake water and a few granola bars were needed to get our spirits up. 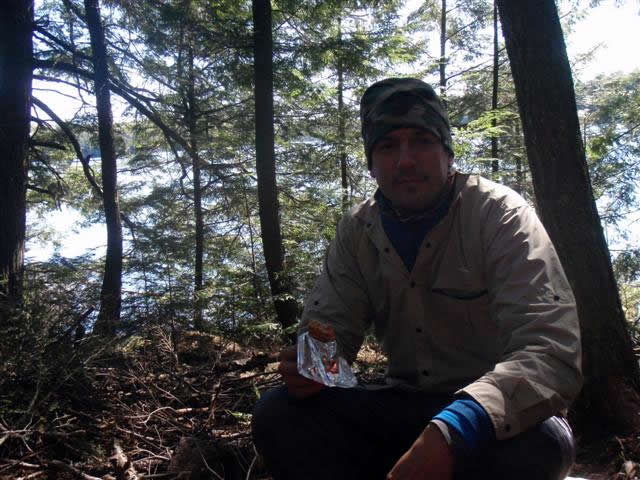 We were looking at a good 5 hour hike to get back to the car. The logic of drinking like a maniac the night before didn’t seem like such a good idea at this point. Regardless, we had to push out and get back on the trail. My energy levels were pretty low so Jay was well ahead of me for the most part – not that he was any better! 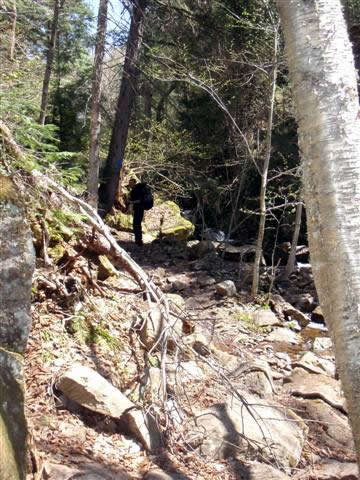 The weather was actually nice on Monday and we had the oportunity to hike with short sleeved shirts…something we hadn’t done all weekend. Even the reptiles of the area were sunning themselves on the trail. 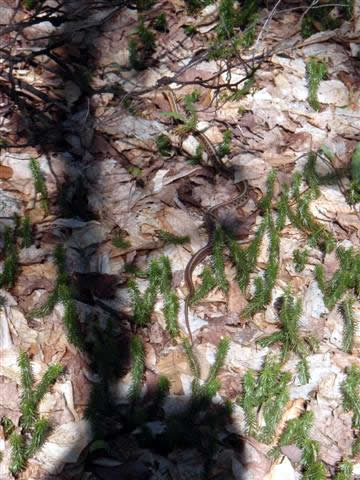 The rest of the hike out was quite a push as we sweat beer out of our pores. A quick stop for lunch and a tiring march out lead us to the car by roughly 4pm. A great long weekend trip, except next time we’ll have to plan the hike out to be a bit shorter if we plan to drink like that!