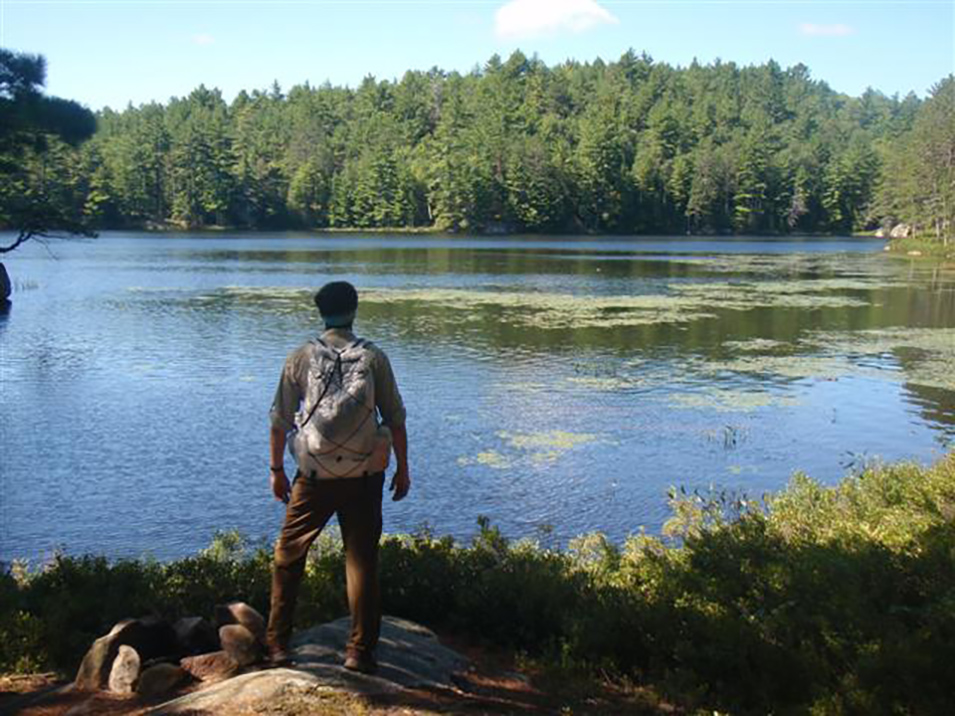 The Abes and Essens Trail is located in the Bon Echo Provincial Park Interior. The full trail consists of 3 interconnecting loops allowing a hiker to choose various hiking distances and times. One can select to complete only the first loop for a 1 hour hike with about 4 km of mileage or do what I did and hike all three loops in a big figure 8. Even the entire trail network can be completed in a day, but I opted to spend a night in the backcountry which allowed for a very leisurely hike. I would rate this trail as easy because of the lack of difficult terrain to cover and the relatively short distance required to hike the full loop. This is a nice easy overnighter, and would be a great place for a first time backpacker to get their feet wet. 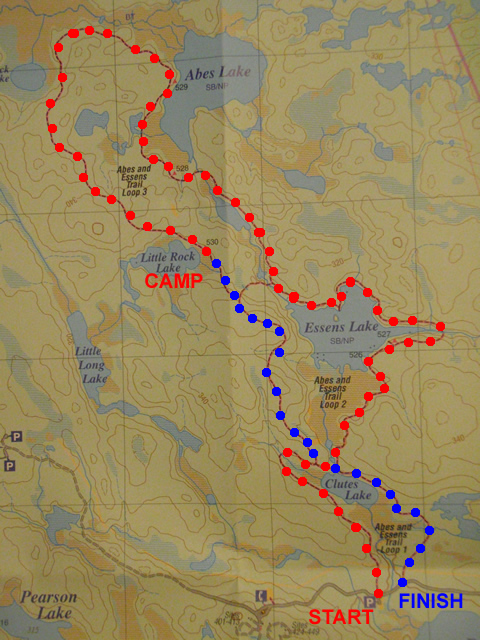 My alarm went off at 5:30am and I crawled out of bed to prepare for my drive to the park. By 6am, I was in my car and on the road. The park is about 300km from my house so I wanted an early start so I would get some decent time on the trail. 3 hours later I pull into the park office and pick up my permit. I didn’t have reservations, but lucky for me there was actually no one else on the trail so I had my pick of the campsites. Little Rock Lake looked to be a nice spot. I grabbed my permit, headed to the trailhead to get my gear together and off i went. 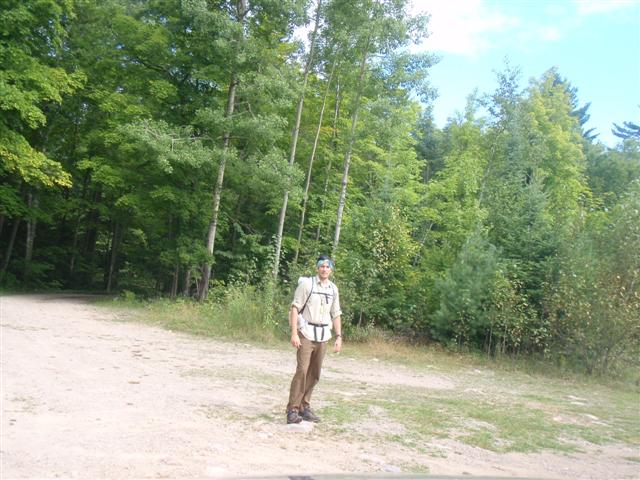 All packed up and ready to go, I hiked the short distance from the parking lot to the trailhead. A large sign greets you as you enter the trail, stating the rules of the park. 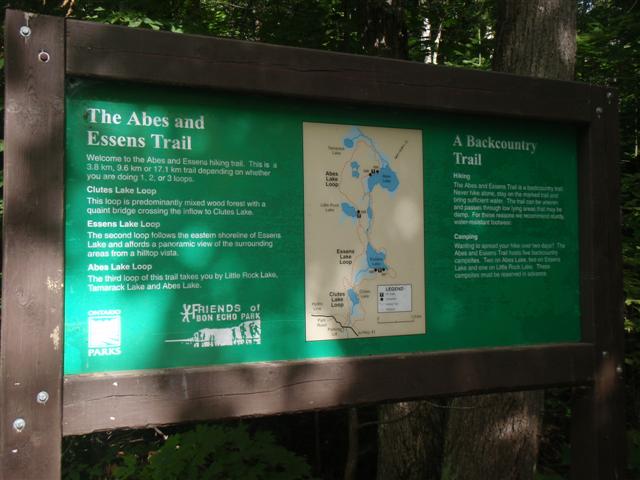 The going is relatively easy right from the start with a nice wooded trail section. It is apparent that this first loop of the trail network is well used by day hikers as it is wide and well groomed. There is the occasional break in the trees that allows a nice view of the lake which the trail runs around. 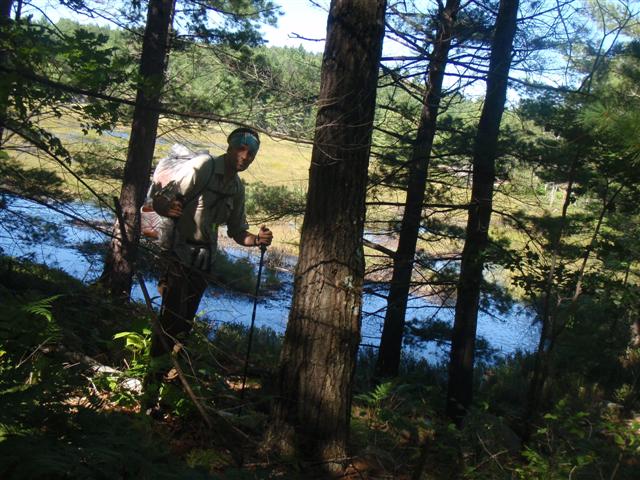 Within 30 minutes of hiking, you reach the north end of the first loop and a wooden bridge that allows you to cross a small inlet of the lake. This is an opportunity to get a wide view of Clutes Lake.

Wrapping the right hand side of Essens Lake, the trial hugs the shoreline which is covered in blueberries. I always get nervous when I see too many blueberry trees…bears love them. In this case, there was no worry and the only animal who joined me was a small chipmunk running along the trail in front of me. 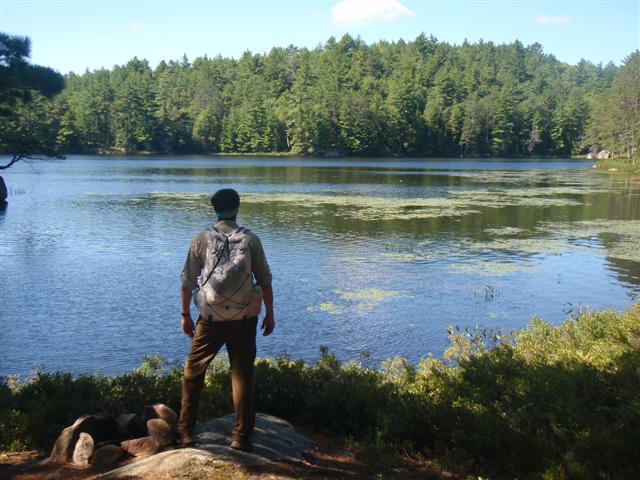 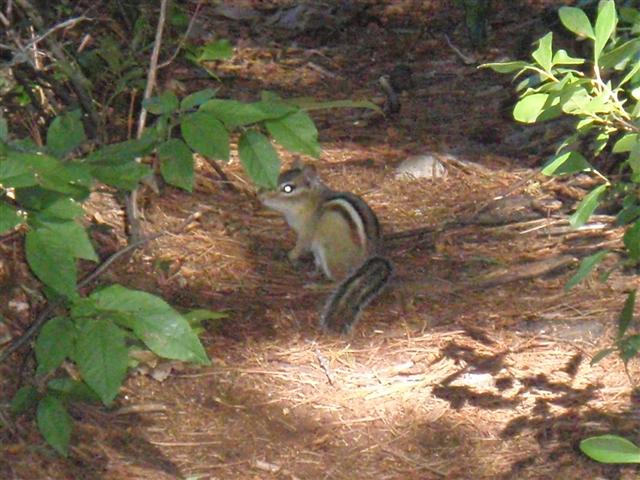 An uneventful hike up the East side of the trail leads you to 2 campsites located on the shores of Abes Lake. At this point, it’s as if no one really hikes past this section. As soon as you reach the last campsite, the trail becomes overgrown. And not just a bit overgrown either, I mean it had some heavy growth. I would guess that only a handful of hikers have been through there lately. I actually lost the trail a couple of times. It was only for brief periods, but still, the bush was dense enough that no trail was visibly showing. 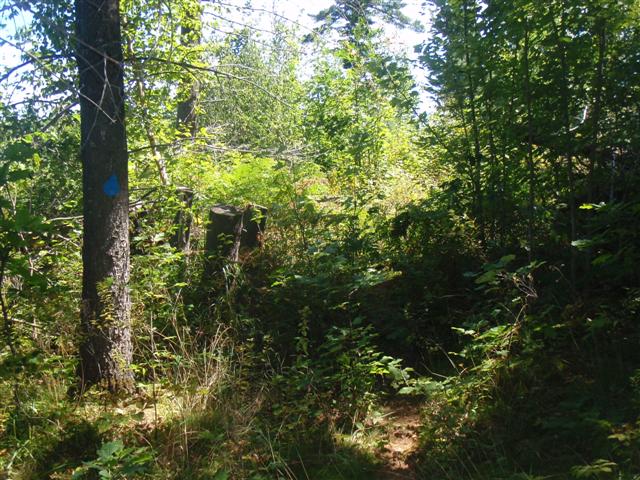 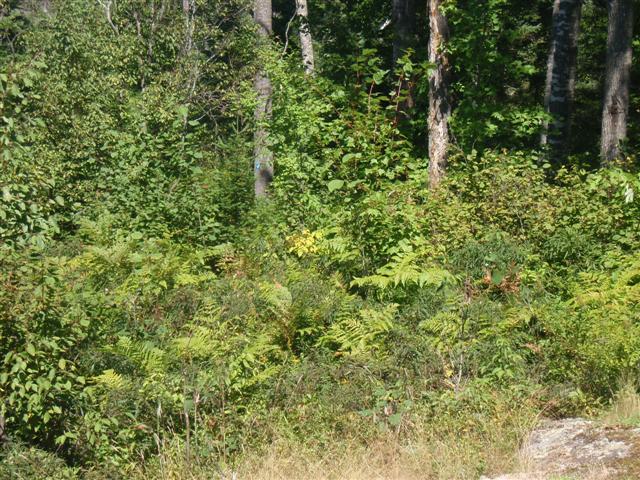 There actually came a point where I thought it was going to take forever to crest the north rim of the trail, but about 30 minutes later, the bush broke open and the trail was once again a easy path. Within 4 hours of leaving from the trailhead, I arrived at my campsite on Little Rock Lake. The lake was a peaceful body of water just to the west of the campsite. My only complaint is that there is pretty much a swamp in front of the site so you had to walk around to the side to get water from a clear source.

The site was quite pleasant with a picnic table and a nice pile of wood a previous camper had prepared and left. Looks like I was going to have a small fire tonight! The site had a small covering of leaves and soil but it was located on a big granite slab so I had to use rocks on my guylines to pitch my tarp. 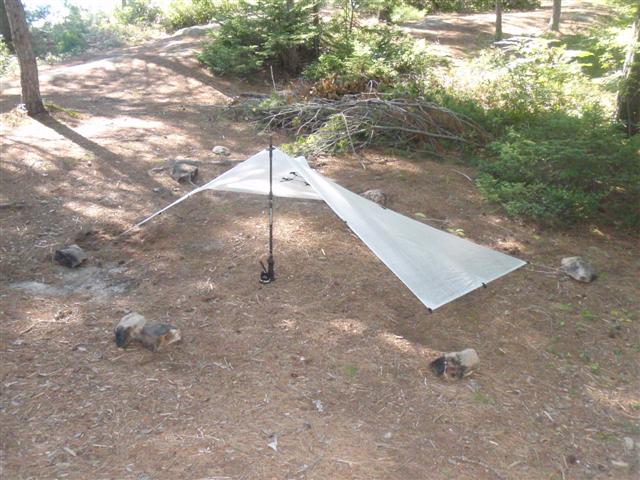 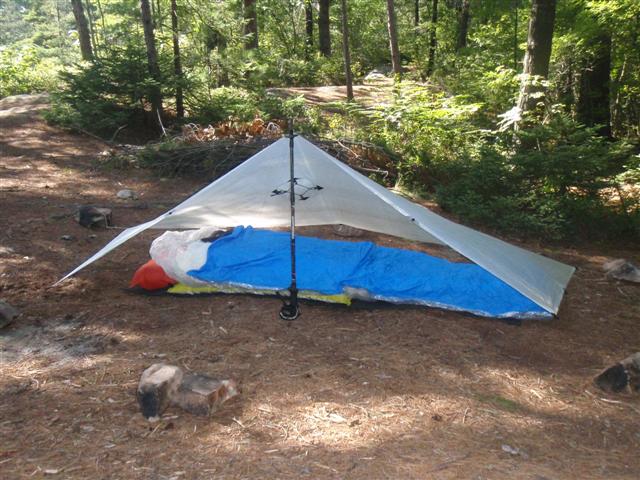 With my shelter and sleeping gear set up for the evening, I decided to walk around and explore a bit. I couldn’t help but notice all the game trails leading to the lake so I figured if I was quiet enough, I may be lucky and get some nice pictures of the local wildlife. To top it off, I noticed a large tree with an abundance of branches, all of which seemed very climbable. Now, I haven’t climbed a tree in years …probably decades…but I decided to do it. I got about 10 feet up and sat for a bit to see if something would come out of the woods. 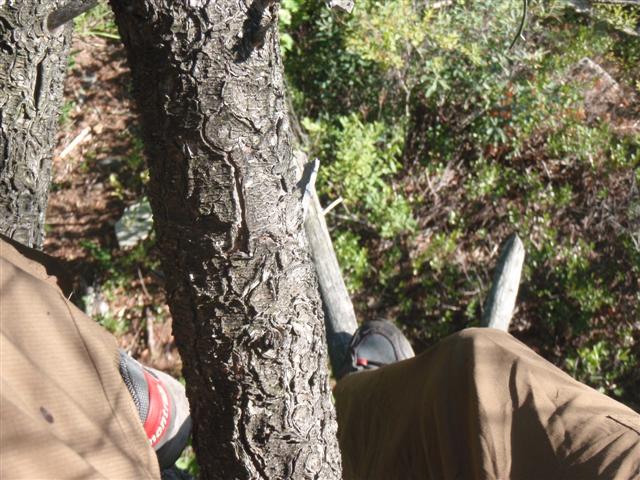 The novelty wore off fairly quickly (I remember it being much more fun when I was younger) and before I knew it I was back at the campsite preparing some food and starting a fire. The night consisted of me, sitting on the picnic table, staring at the fire. By 9pm, I was starting to feel tired so I jumped in my bivy and fell asleep.

It dropped to 4*C and I had a restless night, but not because of the temperature. At midnight, I was woken up by the howling of either coyotes or wolves. Whichever they were, they were loud and sounded a little too close for comfort. I forced myself back to sleep only to be woken several more times throughout the night. It sounded as if they were running around, barking and howling, and playing with each other or chasing something. Probably harmless, but I started thinking how I was the only one on the trail and it escalated to thoughts about werewolves, vampires, and crazy stuff like that (yeah, I have a super overactive imagination!) At about 5:15 am I woke up again to the howling and figured I would just get up for the day. It was still a bit dark so I just waited about half an hour and crawled out of my bivy. It was quite cold out so I bundled up and started to pack up my camp. The lake, with all the mist, looked very different in the morning.

By 7:30 I was all packed up and back on the trail. It looked as though I had a short hike out so there was no need for a blistering pace. The trail was similar to the day before, with a nicely worn path to follow. At this point, I was back in the popular area of the hiking trail. 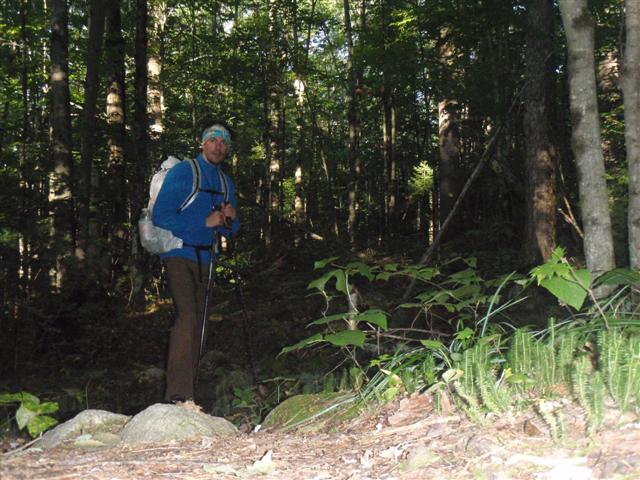 As I made my way back to the first loop of the trail section, it was still early and Clutes Lake still had a nice blanket of fog just covering the surface of the water. I thought that this would be a prime time to catch a glimpse of some animals and paused for a bit. Unfortunately, no one made an appearance. Traveling back down the East side of the trail, I made it to the trailhead within an hour from Little Rock Lake giving me a total hiking time of 5 hours for this trip. A short walk down the road lead me to my car (the only one in the parking lot) where I changed and headed home. 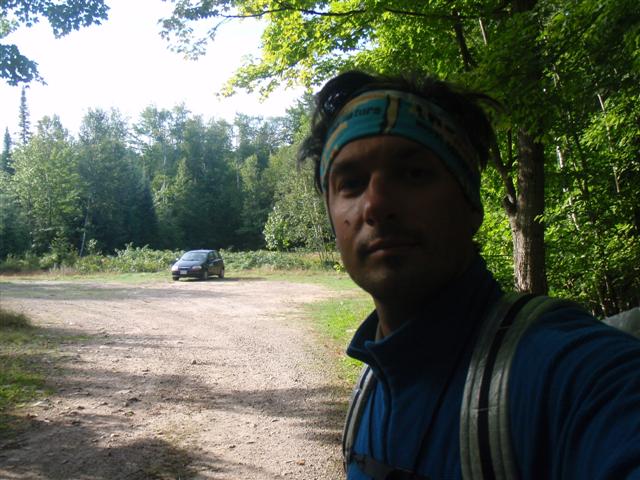 All in all a fun little trip. I must have had even less sleep then I thought because I had to stop on the way home to have a nap in my car!