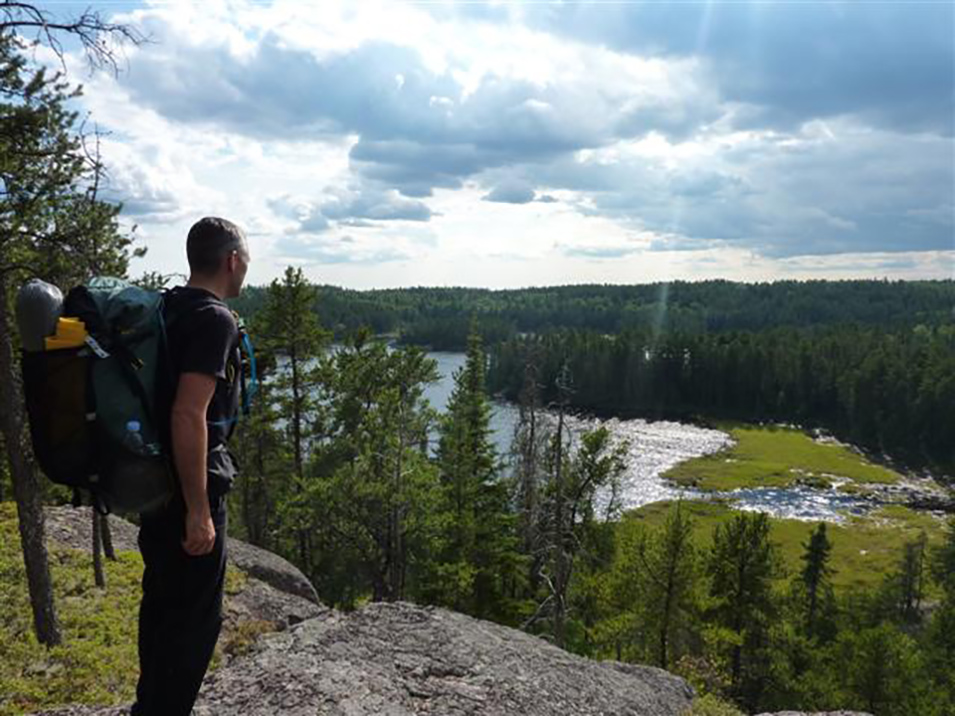 The Hawk Ridge Trail is a great trail and can be completed as an easy overnighter or even a long dayhike. We actually took 3 days to hike the loop because we selected this trail for our 2nd annual Beerpacking Trip. Although the trail is short, it has some excellent scenery and views. The terrain is not very flat which makes this a perfect introductory hike for those looking to get a feel for something more advanced than flat trail hiking. 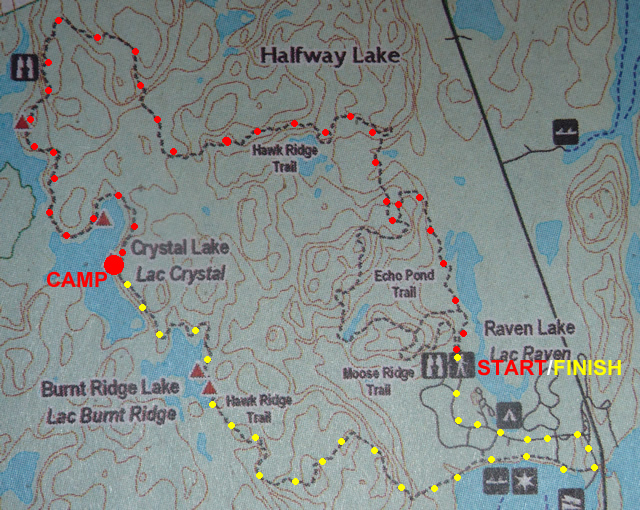 Hiking Time: 3 hours
Distance: 8 km (5 miles)
I picked up Jay at about 8am on Saturday morning and we headed north to Halfway Lake Provincial Park. The park itself is roughly 500 km away and it took us until the early afternoon to get there. When we did arrive, the car campground was full for the weekend, but no one was on the trail. We booked for 2 nights, parked the car, and off we went. 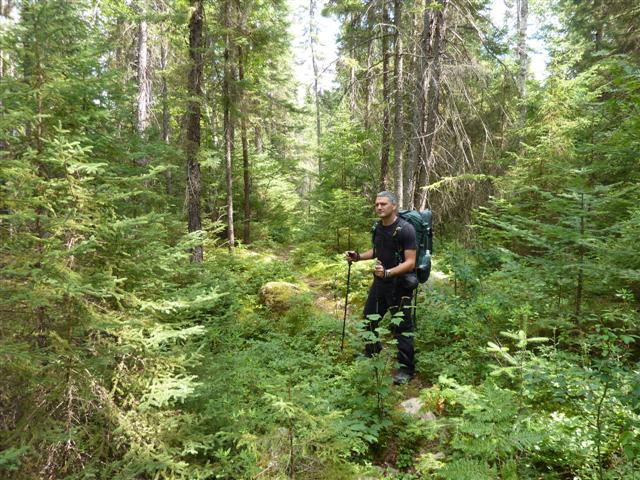 We were well on our way by 3pm. The start of the trail is well worn as you have to take a well used smaller loop in order to get to the big loop. The big loop (Hawk Ridge Trail) is well marked but the beginning sees little use as it is a bit overgrown. Don’t get me wrong, it is simple to follow the trail, but expect to be brushing the edges of the bushes while you walk. 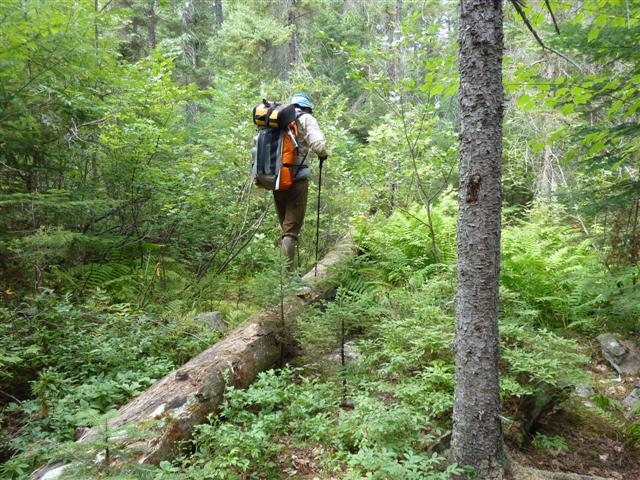 We hiked for about 2 1/2 hours and finally reached the first campsite. This campsite is literally unusable. It is perched on the top of a large ridge and access to the water is extremely diffuclt to say the least – just don’t bother trying. We scoped it out and decided to pass for the next campsite in hopes it would be better. 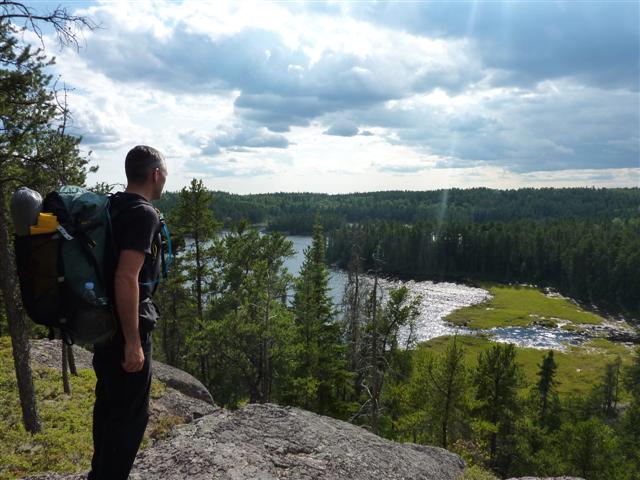 About 30 minutes later, we pulled up to another campsite sign and a small trail leading to the lake. I can’t tell you how happy we were when we saw the site. It was literally amazing – just a small area to squeeze our 2 tents sitting on the edge of a small cove. We had originally thought there wouldn’t be enough room for both our tents and decided to walk around the edge of the cove to see if there was a more favorable spot. In the end, we set up the tents by the fire ring and broke out the beers. 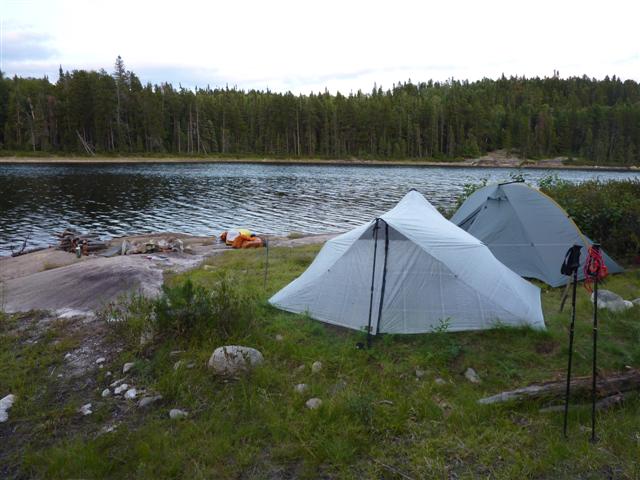 Next on the list was to find some fire wood. Since weight was of no concern this trip, I brought 20 spidduci up for us to eat for dinner. We conconcted a device out of branches and logs to hold the spidducci over the fire but it was only capable of cooking one at a time. Long story short, we started dinner at about 9pm and finished at almost 1:30 in the morning. Needless to say, by this time we had guzzled about 6 king cans of beer by now. It was a perfect beerpacking night!

Hiking Time: 0 hours
Distance: 0 km (0 miles)
I woke up at about 9am after a great sleep. It was a bit chilly in the morning, but we had no hiking to do so we just stayed in our tents until it warmed up a bit. When we did finally drag our lazy bodies out of bed, we made a quick breakfast and cleaned up a bit. I had brought my new enclosed tarp (ALL-W.E.T.) and wanted to set it up so I could get some nice pictures for the website. We walked over to the other side of the cove and pitched it.

After snapping some photos we headed back to camp and began to collect some wood for the fire. We figured that since we had all day and night, we were going to need a good supply of wood to feed our pyro urges. This was not a problem as their was plenty of drift wood on the shore for us. I decided to bring my big folding hacksaw on this trip because I figured we would be cutting a lot of wood and wanted to ease this process. 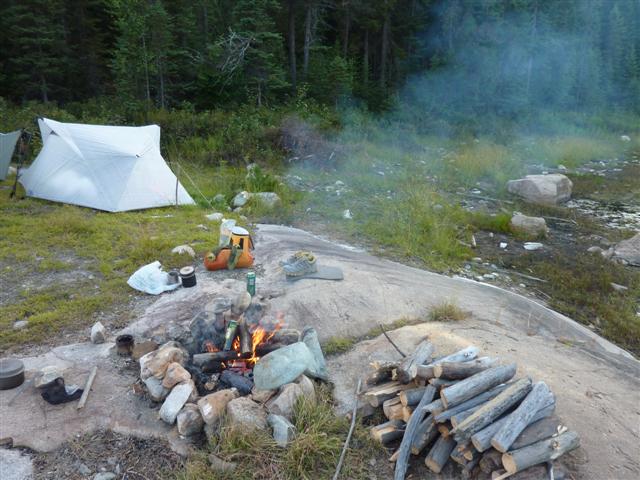 After cutting all the wood, it was time to break out the beers. I thought I would just have one to start the afternoon off and then save the rest for the evening. We were sitting on the rocks by the water and I started to get really tired. I guess the under-active day was causing me to require a nap. 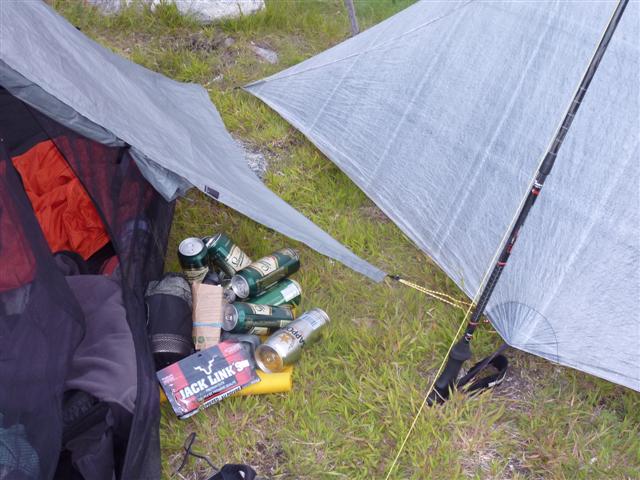 The next thing I knew, I was out cold on the rocks. I woke up a couple of hours later with a bag under my head as a pillow and a sore back. I looked around and couldn’t find Jay so I figured he had gone for a walk. I fell back asleep but then was woken by the sound of snoring. Jay had also fallen asleep but he made it to his tent. I decided to catch a bit more rest and went into my tent. I finally woke up because my tent was hotter than a sauna and I looked at the clock – it was 6:30pm! We napped for almost 4 hours. When I opened the door to the tent it was spitting a bit so I decided to start the party in my tent by cracking a beer. Jay heard the noise of the beer opening and immediately asked what I was doing. I showed him the beer through the mesh vent and he grabbed a can and came into my tent. We hung out for a bit waiting for the rain to stop. When it did let up, we got out and started the fire so we could make a bit of food and get the beers flowing. 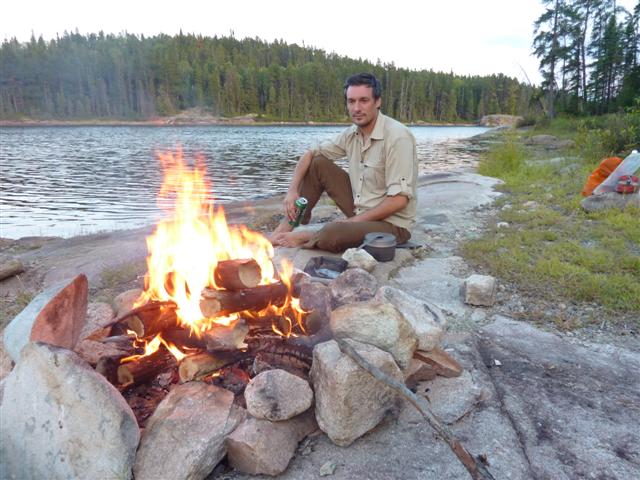 Dinner consisted of 2 bags of beef jerky, some chicken jerky, and a mixed bag of candies. The fire was burning hot and the beers tasted great. At midnight, we decided it wss time for second dinner and made a macaroni and cheese dinner to split. By the time 1am rolled around we were feeling good but it was time to throw in the towel and get some rest for the hike out the next day. We said our goodnights and crawled into our tents.

Hiking Time: 3 hours
Distance: 7 km (4.3 miles)
We woke up to light rain at around 8am. With the short hike out today, we decided to stay in bed and see if the rain would let up. Shortly after, the rain reduced to a drizzle and we decided it was a good time to pack up. When we were ready to hike, I put on my poncho in hopes that it would help fend off the some of the remaining water that was on all the plants along the trail. 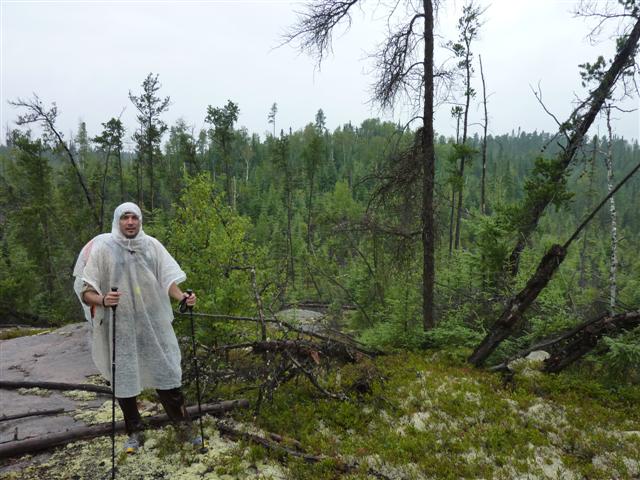 By the time we actually started hiking the rain started again and it wasn’t letting up. We were getting wet fast. The hike out was a bit of a death march because it was raining so hard. We just wanted to get to the car and change into some dry clothes. I was at least wearing my poncho while Jay decided to hold off on the rain gear and stated that he thought it’s going to let up…it poured the whole time. 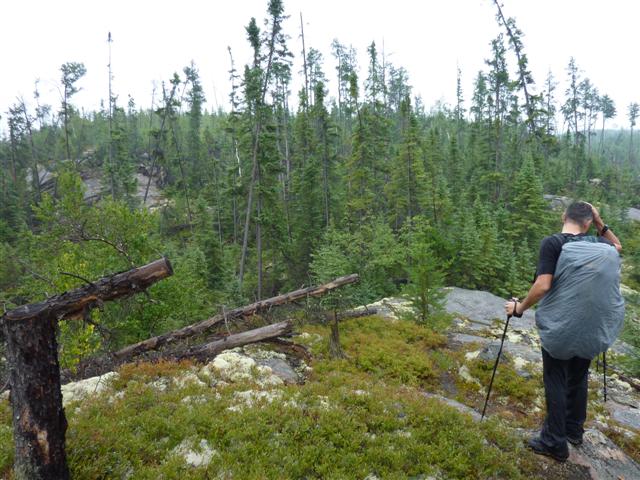 The only time we stopped hiking was to eat wild blueberries and raspberries. If it wasn’t raining so bad, I would have picked a bag full of them and brought them home. 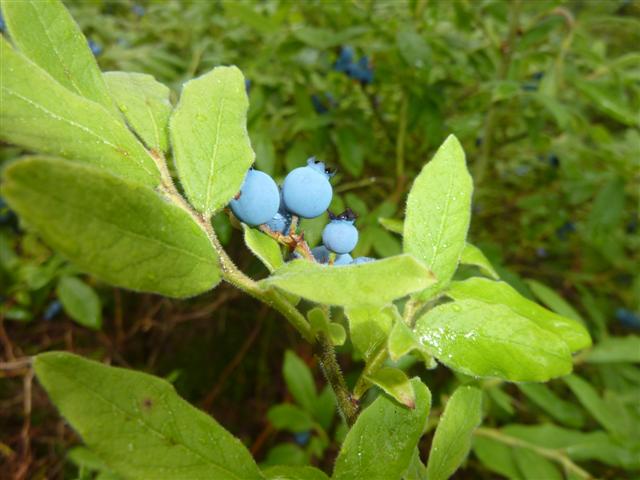 The last hour or so of the trail leads you through a section that was hit with a major wind storm many years ago. Some say it was a tornado while others say it wasn’t. Regardless of what it was, it tore the forest up, broke trees, and unearthed the plants. 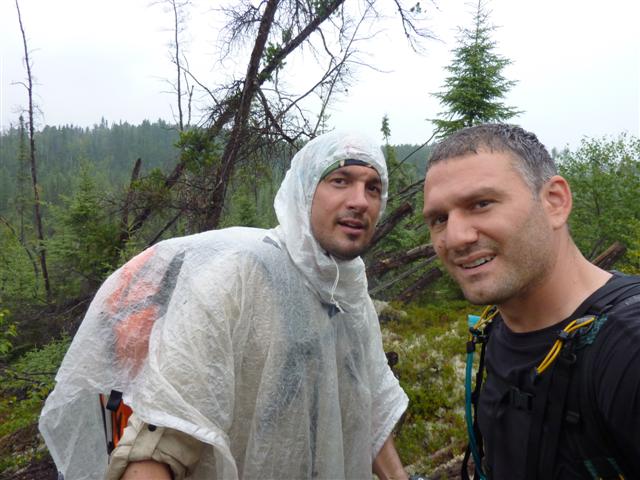 From the view points, it is easy to see the trail of disaster. The trail finally ends at a nice sandy beach and then a walk through the park on the road is required to get back to the car. At the car, we changed into our dry clothes and then headed back home. We had a great time and want to visit the park again. 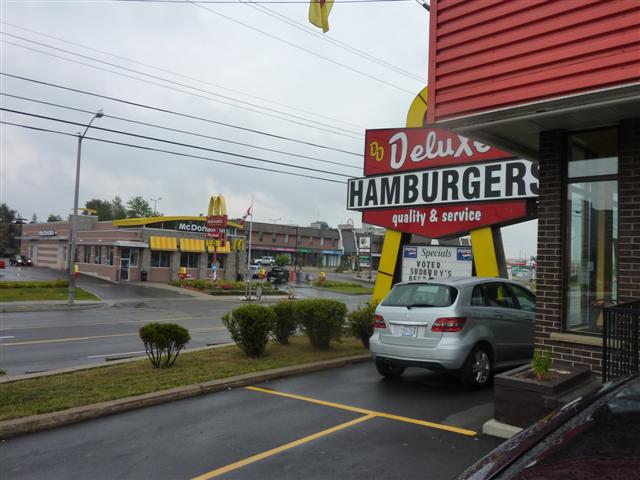 On the way home, we went to grab some lunch and saw that there was a Mcdonalds on one side and then another burger joint across the street that looked like a Mcdonalds but had a different name. We were so intrigued that we actually ate at both places to compare – yep, we are crazy.