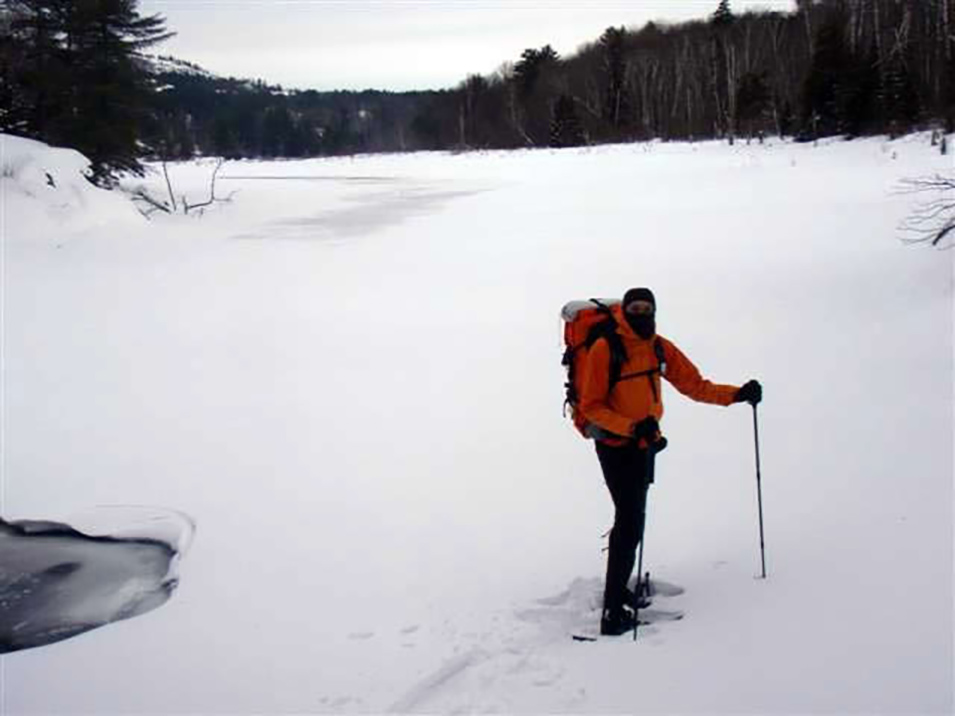 There is a lake on top of one of the high ridges in Killarney Provincial Park named Quartzite Lake. I have always wanted to visit it, but since you have to cross a rather large lake to get to it, and there are no hiking campsites near by, I never got around to seeing it. Well, after some thought, my friend, Jason, and I decided that we should go in the winter as we can walk over the lakes. So, we packed our gear and headed up on Friday night. Below is a map of the area with our route in black…yeah, I know,we didn’t make it very close. 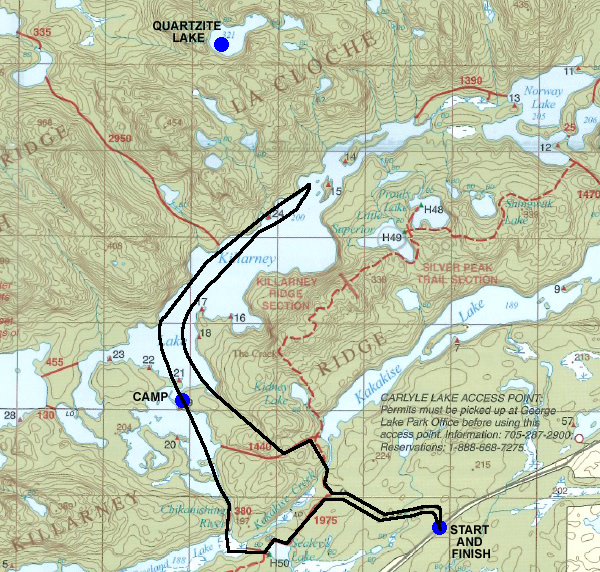 Since it was winter, we headed up the day before our trip to stay locally and get an early start. It really helps when your dealing with such short days.

Jason and I woke up at about 6:30am and headed downstairs to grab some bacon and eggs at our hotel. We were out the door by 8am and grabbed our permit by 8:30. Getting out of the car and onto the trail is always tough when it’s -10*C outside. 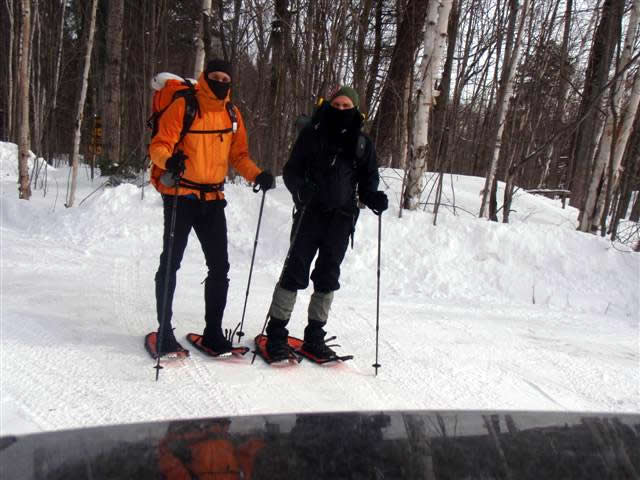 About 2 hours in we come across a small bridge, so we stopped for a picture and Jay grabbed some energy in the form of M&M’s and licorice. 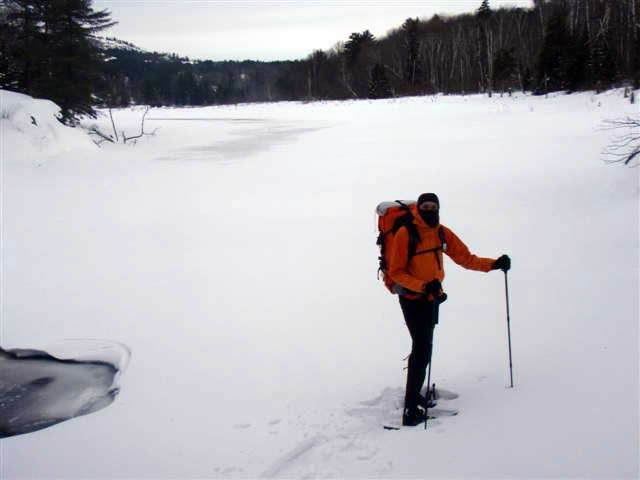 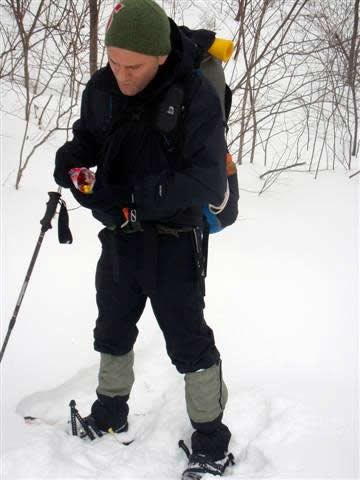 We had some difficulty navigating through the rocky areas and our snowshoes don’t really have the grip for the slope we encountered by we made due. Our intention was to follow the portage from one lake to the next, but with the deep snow, it was tough to see the trail. We ended up going slightly off track, as you can see in the map, but we eventually made our way over the ridge. As we descend out of the bushes, the lake appeared through an opening in the trees. 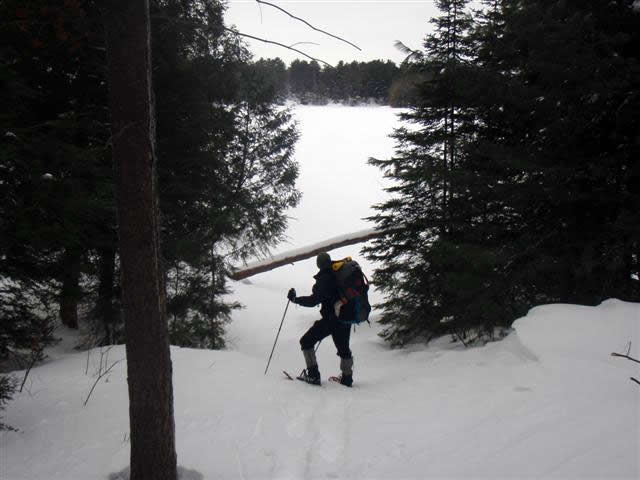 We verified on the map that we are in fact where we think we are before heading off onto the lake. By now, the lakes were frozen a few feet thick but you can never be too careful. We had a brief chat about what to do if one of us goes through just to avoid any confusion during the event. We flipped a coin, and I headed out first with Jay following behind. 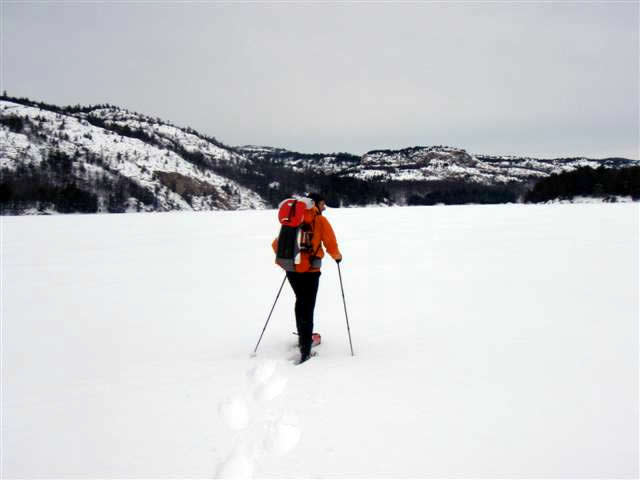 By the time we actually reach an area where we think we can get to Quartzite Lake, the terrain is a little bit more challenging then we had previously thought. Slowly, as we walk up and down the lake along the face of the ridge, it becomes apparent that we are not equipped to take on such a challenge. 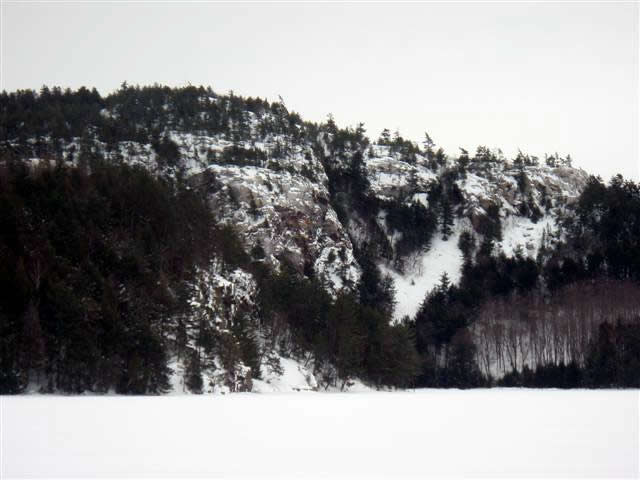 With the overcast sky and the late afternoon time, we are in agreement that we should just start heading back and make camp along the way. We will come back another time with more daylight, equipment, and preparation in mind. Regardless of the goal, the terrain and scenery is great to take in. 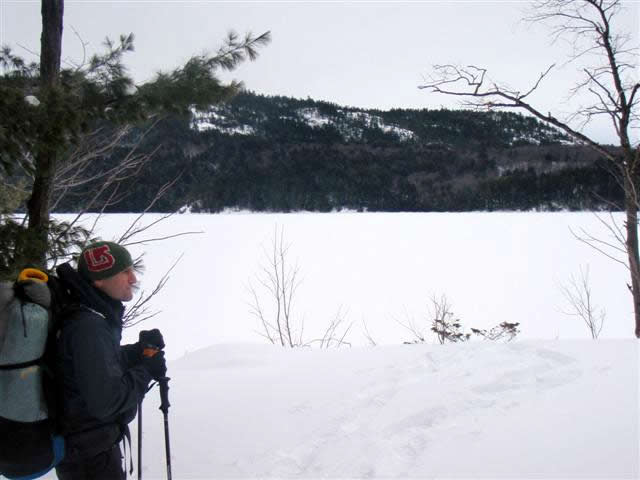 We make it back to a small cove we passed earlier in the day and decide that it will make a nice sheltered area to set up camp. For some reason I’m not liking the layout and decide to walk around aimlessly looking for a better spot. After probably an hour of wasting time, I decided I am fine with the original plan and we begin to pack down the snow to make platforms for the tents.

Once the tents were up, we dug a small snow kitchen and broke out the stove to get ready for dinner. This was my first trip with the Coleman Extreme so I was excited to try it out. It ended up performing much better then my inverted canister windpro I had been using for the last year or so. Next trip I will make a cozy for the gas canister to help keep it from freezing. 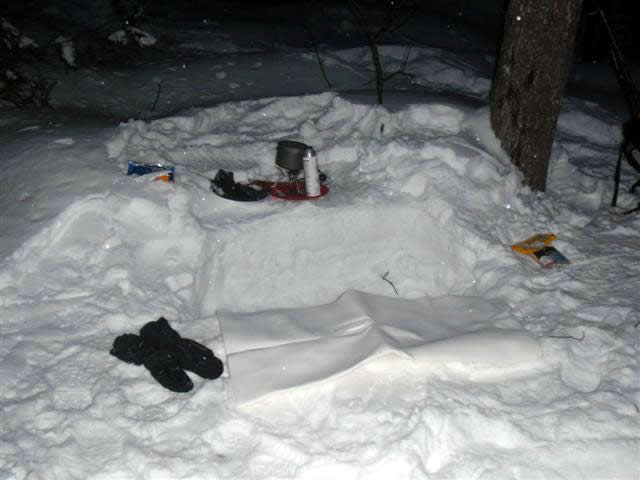 Before bed the snow really started to fall. We packed up the food and kitchen gear before retiring to bed. We had to shake the tents off before getting in. It was a good test for my MLD Duomid. 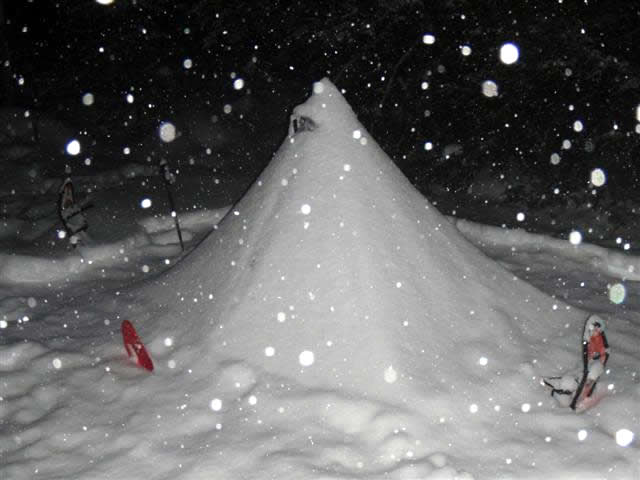 We woke up to clearer skies but nothing to write home about. Breakfast consisted of a few granola bars while we kept moving to keep warm. We took down the tents, packed up, and were on our way. 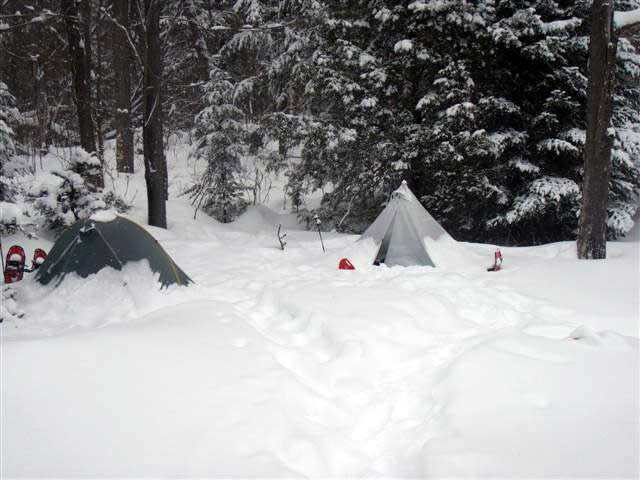 We decided to take a different route home to add to our adventure. We followed our tracks back along the lake until we came to our cut off point. 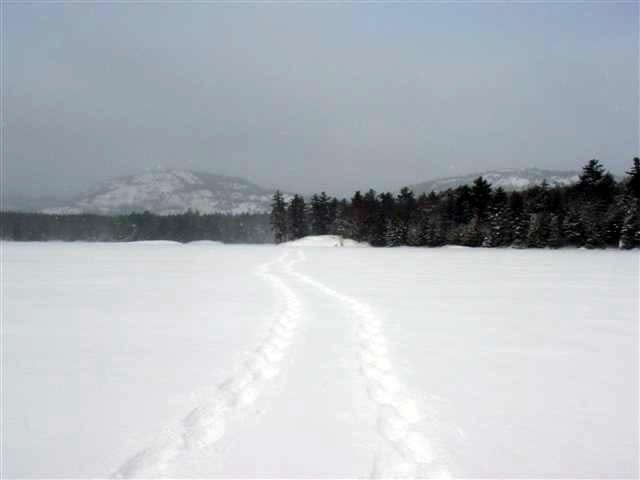 A few hours later, we came to our proposed crossing point across Freeland Lake, but it wasn’t frozen over fully. We pondered by the side of the lake discussing how far from the unfrozen ice we would have to walk in order to keep from falling through. 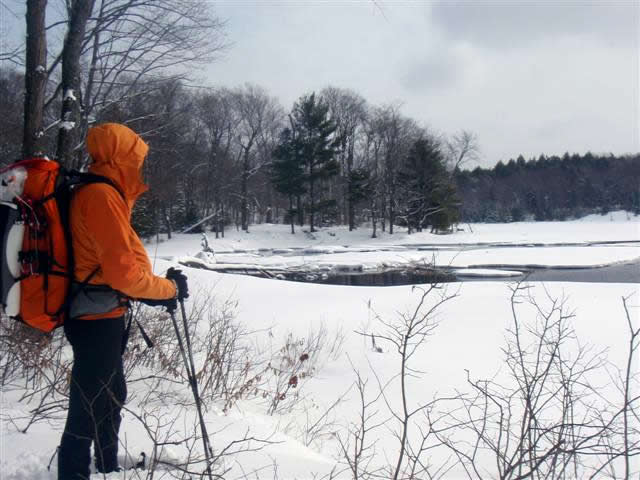 We decided to head back up the portage and find a different way to cross. We walked back quite a bit but there really wasn’t anywhere with a secure ice covering. Jay had actually lost his water bottle somewhere and I was running out of water fast. We didn’t want to stop for lunch, but since our hike out was taking so long, we were thinking that we may have to. We tried to cross over a narrow stream, but it proved to be no enough to support our weight. 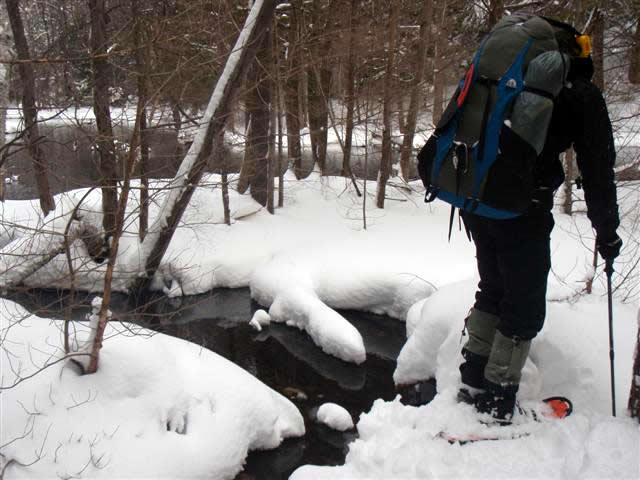 Again we retreated from the stream and headed back down to Freeland lake. At this point, we are both tired and dehydrated. We decide that if we stay far from the edge, we should be good. Looking back, it probably wasn’t the best decision, but it worked out in the long run and we made the push back to the car. All in all a great time, but we have to go back to conquer Quartzite Lake!